Cruise Ship Runs Aground off Coast of Italy – 6 Dead, 69 Missing 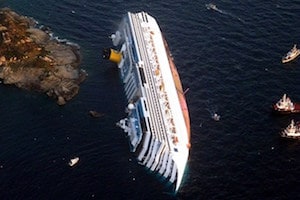 Only hours ago, a Costa cruise ship ran aground off the coast of Tuscany and is now sinking.

The massive Costa Concordia – which was carrying more than 4,000 people (passengers and crew) – took on more water than it could handle through a 160-foot gash and the ship quickly listed to its side. Because one side of the ship rapidly submerged under water, nearly half of the life boats were rendered useless.

Currently, six people have been confirmed dead and another 69 are still missing, potentially lost on the capsized ship.

The 114,500-ton vessel’s captain, Francesco Schettino, was arrested and charged with manslaughter and leaving his post. According to reports, the captain of the luxury cruise liner abandoned ship after it that ran aground while countless people remained stranded on the sinking boat.

“They were at dinner at the time, and they just heard a bang and felt a jolt and all of a sudden the ship tilted,” said Phyllis Papa of Wallingford, Connecticut, whose sister and niece were aboard the luxury liner.

“There was a lot of chaos no one knew what to do or where to go, and they couldn’t walk because it was tilting so bad,” Papa said. “Everyone was screaming. They thought they were going to die.”

Officials at the United States Embassy in Rome said all of the Americans onboard the ill-fated ship were accounted for.

“They had nothing but their clothes on, they lost everything,” said Papa, who spoke to her sister Maria and niece, Melissa Goduti, in the hours after their brush with a watery grave. “They watched it sink.”

Carrying 3,206 passengers and 1,023 crew members, the Costa Concordia was on its usual weekly route across the Mediterranean Sea, which departed from Civitavecchia – the port of Rome – only three hours before disaster struck.

The Costa Concordia is now the largest vessel ever to sink. Notably, this horrific tragedy comes just months before the 100th anniversary of the sinking of the Titanic.
Source: NY Daily News
Contact Us
Areas of Practice
Client Reviews
★★★★★
I was extremely pleased with the result of this offices' work. Their knowledge of the situation brought me to discover that I had further medical issues. They took time to explain what needed to be done at each step and what the result would be. I am extremely pleased with the outcome. Martha
★★★★★
When you want someone to take on the big guys, Holzberg Legal is who I had and would want in the fight. The big corporations have big and powerful legal teams fighting you all the way. You want the hard working staff and sharp legal minds and advice on your side. It is a fight that is stacked against you. Get the best. David
★★★★★
Mr. Glenn Holzberg did an excellent job for my brother, Querobino, Mr. Holzberg was very active in the lawsuit and was determined to either go to trial or get my brother a settlement. His persistence and patience proved to be in our best interest. I would have no second thoughts in recommending Glenn in other similar litigations. Lavinia
View More
Submit a Law Firm Client Review